The dampwood or Termopsidae termite is the largest of all the termite species. It ranges in size from 1/3 inch to over a ½ inch in some cases. Due to its large size, it causes more damage to wood and wood structures than its cousins, the subterranean and drywood termites, and is a serious economic threat in areas along the Pacific Coast.

Dampwood termites can be found in most areas of the United States if conditions are right, but thrive in Florida, Hawaii, California, Oregon and Washington State. They are also prevalent in the mountain basins of Nevada, Idaho, and Montana. And can you guess when they start to swarm? Yeah, right around August. Usually towards the end of the month, so it’s a good idea to make sure you can recognize them now.

Where do they live?

Often referred to as the “rottenwood” termite, the dampwood termite needs very moist, rotten wood and a constant water supply or close contact with water to survive. Even in a high humidity climate, it needs a water supply or it will die. For this reason, the dampwood termite will nest in trees, rotten logs and untreated, damp wood, and sometimes will even make its home in living trees.

How to prevent infestation

Preventing and treating dampwood termite infestation involves the same techniques: eliminate the moisture content, eliminate and prevent the problem. Conduct a periodic inspection of the home. Include the foundation and crawl space areas to look for dampwood termite infestation. Using a sharp pick or screwdriver, test support beams, floor joists, sills and other wooden structures for signs of decay. One of the most noticeable symptoms of dampwood termite attack is piles of sawdust and dead insects in and around wooden structures in the home.

How to treat infestation

Although professional exterminators treat most species of termites chemically, dampwood termite treatment is different. Fixing the cause of the moisture problem – leaky pipes, wood-to-soil contact, etc. – is the only way to make sure re-infestation doesn’t occur. Damp, rotten wood should be replaced and the new structure treated with a wood treatment like the following. 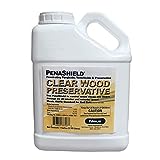 This will prevent dampwood termite infestation. And did we mention that August is a good time to be thinking about that kind of thing? Yes, early August, because we’ll be seeing too much of these little creatures soon enough.